Don’t Overlook the College in Your Backyard: A Review from Alex Snow, Class of 2017, Dexter High School 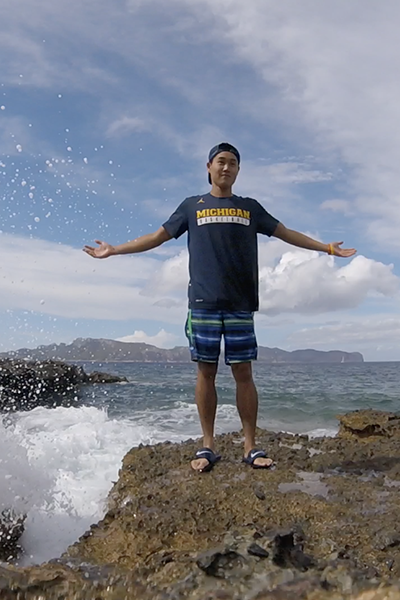 When Alex Snow first started touring colleges, he looked at several other colleges in the Midwest before determining that the one in his own ‘backyard’ was his perfect fit: The University of Michigan. Alex visited Northwestern, Illinois, and Michigan State, and additionally applied to the University of Illinois at Chicago, Wisconsin. Hailing from the Dexter area, Alex thought he knew the University of Michigan after driving through Ann Arbor and attending football games. However, it wasn’t until Alex actually enrolled in a campus tour that he fell in love with the school, highlighting the value of campus tours in helping prospective students truly understanding the student experience of attending a certain university.

Initially in this process, Alex says that he didn’t have a preference toward any of the schools he applied to. However, “Eventually I decided that Michigan was the best fit.” Alex was attracted to the “overall strength of the university. I have so many interests that I need a college where I can change my major and not compromise the level of education.” Indeed, Michigan boasts the top programs for a variety of majors, and graduating with any degree from the university is often a ticket to many opportunities.

That being said, admission to the University of Michigan is extremely competitive, the 2016-17 application season being a particularly memorable one after receiving a record breaking number of applications, and with the university’s acceptance rate dipping to an estimated 22%. This year and in the years to come, the importance of standing out to admissions officers cannot be understated. Alex did this through a Zeemee video that he attached to his Common Application, allowing him to showcase his interests such as swimming, tennis, and attending football games. “I think my Zeemee video really added a lot to my application. Essays can only say so much about who you are and what you’re about whereas something with visuals and audio is much more personal and unique,” he says.

With such heightened stakes, which became more personal after seeing some of his peers get deferred, Alex recognized the relief of having a college planner to help him through the application process, from earning that acceptance to attaining the aid to finance it. “Parros made the college app process a lot less stressful. I never had to guess or take the time to research what to do. They know exactly how to put every student in the best position to get into their desired college with the best financial package.”

In fact, when asked about his advice to the next round of high school seniors applying for college, Alex recognized the challenges of trying to apply by oneself. “Honestly, hire Parros. Having a good GPA and ACT/SAT doesn’t get you into college. It helps, but there’s so many other parts to an application that the average student has no idea how to approach.”

Now that Alex has completed this overwhelming process, he’s had time to reflect on what he’s most excited for during his freshman year at U of M. His expectations for his future as a student is what the university looks for in its students: an inner drive and a willingness to share and explore that within the Michigan community. “I’m excited to find my passion and do what I love. The social aspect, too– always being surrounded by new people and ideas.” The University of Michigan is known worldwide for its devotion to the innovation and widespread communication of ideas, and in hindsight, the university is the perfect fit for Alex.

If the University of Michigan sounds like the dream school in your backyard, consider scheduling a consultation with us so we can discuss application strategies, and earn you a spot in Michigan’s next freshman class.